Every so often, on this list and at conferences, people comment that the contingent faculty movement needs a new narrative.  Given the lack of  progress over the years, it is hard to argue with that contention.

While contingents can’t be blamed for seeking tenure, it may be a fatal flaw for the movement to hold it up as the goal.  For one thing, calling for tenured for contingents may alienate some of the tenured, who have competed nationally for their jobs and satisfied their tenure-review committees.  Some of the tenured may react emotionally by thinking that casually hired contingents don’t deserve the distinction.  Also, proposals that call for tenure, like proposals that call for equal pay, give policy makers an easy and polite excuse to drop consideration of the idea since most state governments do not have extra funds to finance tenure or equal pay.

Would the following 10 points work if the international movement were to embrace them?

(The acronyms used below, UDHR and ICESCR, stand for the UN’s Universal Declaration of Human Rights and the International Covenant on Economic, Social and Cultural Rights.)
=====================

Contingent Faculty Bill of Rights
1.              Job Security.  Job security shall be achieved by establishment of a defined probationary period which, when satisfied, confers reasonable protection for the employee that his or her job will continue; layoffs of employees who have satisfied the probationary period shall be subject to due process.

Tenure is one superior form of job security, but reasonable job security can be achieved without tenure by regarding those who complete a probationary period as regular employees and regarding job security as normal and continuing employment condition, as it is for most public sector employment.  While there is justification for tenure as an honor bestowed on deserving faculty, there’s no justification for the gross inequities in compensation of the current tenured/contingent castes.

2.              Academic Freedom Protection.  All higher education faculty must have academic freedom protection to properly perform their work as educators from their first class on their first day of employment—those first students of that faculty member deserve it.  Academic freedom is a form of job security for the tenured and the contingent.

5.              Equal Pay.  The principle of “equal pay for equal work” shall be honored.  All faculty shall be compensated according to a single salary schedule that recognizes length of service and professional development.

If the disparity in tenured and non-tenured compensation rates are so significant that equal pay cannot be implemented in a single budget year, a multi-year phased-in solution shall be permissible.

6.              Seniority.  Seniority shall be accrued by contingent faculty members and used as a factor in workload assignment and job protection.

7.              Protection against Unemployment.  Since the pattern of laying off contingent employees at the end of every term is no protection against unemployment, that practice shall be minimized.  When layoffs are necessary, it shall be the moral responsibility of employers to earnestly promote access to unemployment compensation for workers who are unemployed.  Employers or their agents who do not make a good-faith effort to promote unemployment benefits to laid off employees or who misrepresent the employment status of employees, whether willfully or through error, to discourage unemployment claims shall be deemed guilty of unethical business practice and shall be answerable to all civil penalties.

8.              Advancement.  Contingent and tenured faculty shall have equal access to advancement, including pay raises that recognize length of service and professional development, among other opportunities.  ICESCR 7 (c) shall be upheld: “Equal opportunity for everyone to be promoted in his employment to an appropriate higher level, subject to no considerations other than those of seniority and competence.”

9.              Unions.  The right to form a union for the mutual protection of workers is affirmed by UDHR 23 (4).  But a distinction must be made between the right to join a union and the failure of a union to defend the fiduciary interest of those it represents.  A union has the obligation to honor its duty of fair representation, which means calling for equality in working conditions.  When a union does not strive to defend equal working conditions for those for whom it represent or favors one class of union member over another class of union member, that union shall be considered complicit in a violation of Human Rights.

10.           Due Process.  Just and fair mechanisms must be established to enable unionized workers to hold their unions to account if they feel they haven’t been represented appropriately by those charged with administering the Collective Bargaining Agreement or if they feel there’s a conflict of interest between a union official/senior, tenured faculty who is, because of the nature of post-secondary work, often in a sub-administrative role in relation to their contingent colleagues. 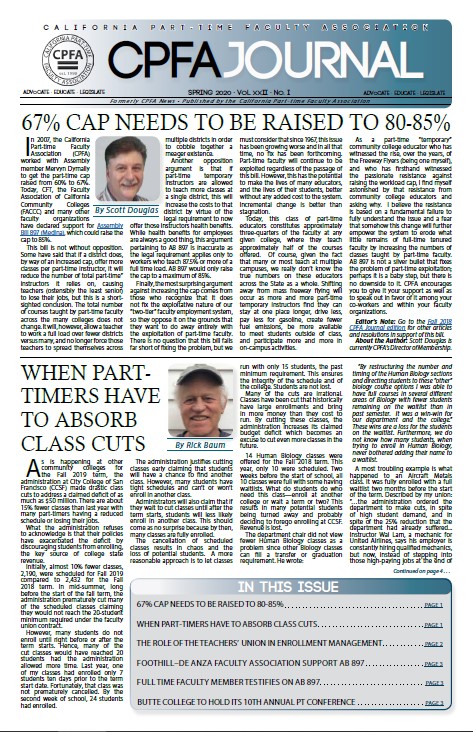