The New York Times recently ran a story that finds empirical evidence corroborating the economic struggle most working people experience:  “A Recovery, but Only for Those Who Need It Least.”  The explanation the author gives for the virtually unnoticeable 1.1% increase in wages (2010-2013):  “Wages have been under pressure for the last several years, as high unemployment has held back the ability of workers to demand raises.”  In other words, workers don’t have leverage.

The absence of leverage has been particularly painful for part-time and temp workers.  In higher education, part-time employment has left most of the leverage in the hands of administrators, who, following precisely the logic of the Times article, have consistently raised their own salaries but no one else’s.

Consider Antigua for your summer vacation

The Times article assumes there is only one source of leverage to influence wages: competitiveness for skill sets in the marketplace. But in higher ed, this kind of leverage is all but gone for while administrators are the ones who decide how many full-time positions to offer, they don’t care about your skill set. To admittedly simplify the situation, every time administrators pay for a full-timer, they more than double the cost of the education being provided to the student and have to deduct that amount from the money pool available to pay themselves. This trend toward increasing contingency is well-documented. Each year across the country fewer tenure-track jobs are offered than the year before. National averages now put the figure of contingent labor at 70%. To use my department at Southwestern College as an example, the department offered three full-time positions last year, which was considered by everybody teaching to be somewhat extraordinary. But there were ninety-three part-timers working in the department who vied for those jobs, not to mention outsiders. That’s a 3% hire rate. This means that it would take thirty-one years for everyone in the department to get a full-time position if no one retired and no one were hired as a new part-timer.

But there is another source of leverage, apart from trying to play in higher ed’s version of Survivor, and that source is organizing.   The Times article could have added (but didn’t):

Along with the oversupply of qualified workers, Americans have also shown little ability to represent their interests as a group and demand better wages for themselves from the top 1%.

This is where we part-timers need to step in if we wish to have any influence over our working lives. Providing leadership for fellow teachers through unions and associations such as AAUP and CPFA are what can make the difference.

But why part-timers? How can we be the solution?

Taxpayers already feel that they are forking over a fortune to administrators to act as leaders, so why can’t they provide it? And then there are the full-time teachers themselves, supposedly more qualified and competent than the rest of us. Why not them?

I will present my best answer to each of these queries. With regard to administrators, the main answer is that they are the sometime authors but definite enforcers and benefactors of the current system.  According to historians of higher ed, legislators empowered administrators and fueled a corporate model as a response to demonstrations on colleges during the Vietnam war. This in response to a public alarmed at the potential shift in power the protests represented.  Together they looked for mechanisms to bring colleges under more social control. Administrators and corporate consultants brought with them a variety of strategies to discipline—in the Foucauldian sense–both students and faculty. One example of such a strategy is teacher assessment. But the overriding strategy was what geographer David Harvey refers to as the dispossession/ privilege dialectic. This technique is the core, according to Harvey, of corporate globalist practice. The idea here is that whenever there is a group with solidarity one wishes to disrupt, the best approach is to dispossess a small group (the original contingent faculty) while privileging others (the tenured and tenure track faculty). This creates different sets of interests and destroys solidarity. Gradually one grows the dispossessed group until the entire group can be dispossessed.  Witness the new all-contingent university.

The evidence for Harvey’s lack of solidarity among teachers in higher ed is rife and leaves part-timers with no option other than to lead ourselves if that’s what we want. To give some local examples, in the Grossmont/Cuyamaca College district where I have taught, I was not allowed to attend departmental meetings. It is, apparently,  district-wide policy to exclude part-timers. One part-timer I know had to ask special permission to participate in these meetings so she could tell them what was happening with their student learning outcome program, something she was managing for them for free. In that district and other local districts, some chairs have reputations for offering part-timers a single class per semester so that there is a larger pool of part-timers to compete against each other and teach scared. In other cases chairs are reported to limit the number of classes offered to any particular individual so that even the few benefits part-timers are qualified for, such as subsidies for healthcare, are continuously denied.

And then there is the cultural side of the breakdown of solidarity. The Chronicle of Higher Education somehow vetted the now notorious Stukel editorial through its process. Many full-time faculty have publicly denounced this letter, but the alienation from her fellow teachers that she expresses is not her unique experience.  There are enough Stukels out there to prevent meaningful leadership from full-time faculty.

So it’s up to us, guys. We have to speak to each other, communicate, put some energy out there even when our lives are incredibly busy if we wish things to get better. I take comfort in the fact that what we’re doing is also in the best interests of our students. One of history’s great academics who understood the importance of teaching the whole person (something that gets overlooked in the corporate model) is Quintilian.   His SLO: to educate the good person who speaks well. We are all going to have to speak well and long—and together–if we hope to lead academia out of the current mess. 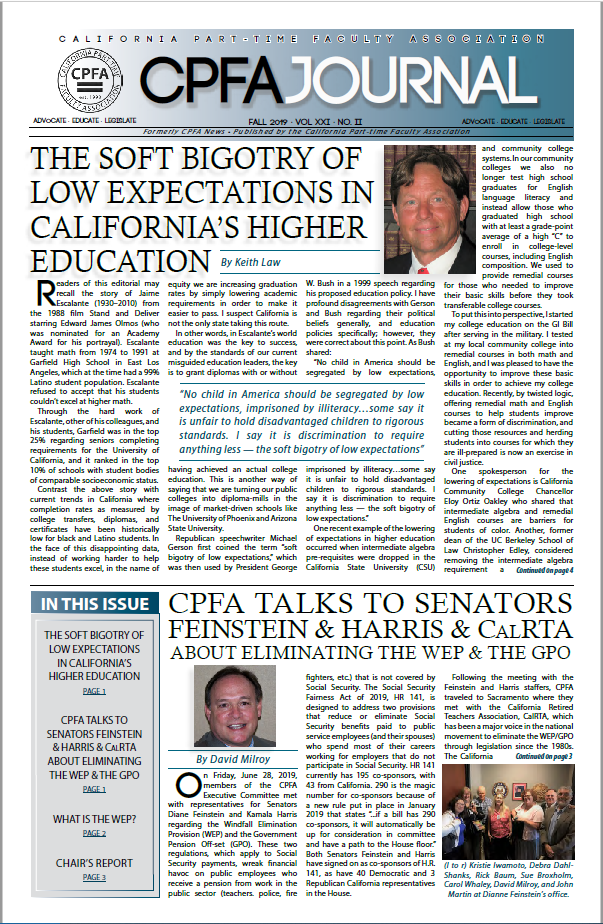