How Many Contingents Have Lost Their Jobs from the Pandemic?

How many contingent professors have lost their jobs or had their teaching loads reduced since the COVID-19 pandemic started more than a year ago? This question has the same answer as nearly every other question involving contingent faculty. No one knows. Since we don’t count to either administrators or union leaders, we are not counted.

In May 2020, the  Chronicle of Higher Education started to keep a running tally of college layoffs (“As Covid-19 Pummels Budgets, Colleges are Resorting to Layoffs and Furloughs“). But while the  Chronicle included faculty layoffs by college, it did not keep track of the various faculty categories such as full-time, tenure-track, contingent, part-time, graduate teaching assistants, etc. Even this task proved so daunting that the newspaper stopped tabulating completely by July 2 of last year.

Last November, The Washington Post published ” The Lowest-Paid Workers in Higher Education are Suffering the Highest Job Losses.”  Danielle Douglas-Gabriel and Alyssa Fowers wrote, “In the spring, instructors with master’s or bachelor’s degrees and part-time educators with some college faced the most layoffs. The pattern suggests these are adjunct instructors, who are often hired on a semester or annual basis, or graduate teaching assistants. In the fall, instructors with doctorates fell from full-time to part-time, suggesting adjunct instructors teaching fewer courses or tenured and tenure-track faculty being furloughed for days or weeks at a time.”

By February 2021, Chronicle reporter Dan Bauman published ” A Brutal Tally: Higher Ed Lost 650,000 Jobs Last Year,” saying that “for every eight workers employed in academe in February 2020, at least one had left that job 10 months later.”

In April, Bauman wrote ” Here’s Who was Hit Hardest by Higher Ed’s Pandemic-Driven Job Losses,” saying that 570,000 higher ed workers, or one in nine, lost their jobs in the previous year (U.S. Labor Department Statistics): “Adjunct faculty experienced the greatest decrease in size, with a nearly 5% reduction in workforce according to the College and University Professional Association for Human Resources.”

Any count of adjunct job losses is likely to be an under-count. Many colleges let contingent faculty go without considering them to be laid off, fired, or terminated. The colleges argue that these are “temporary” employees with no contractual rights to continuing employment. It is normal for them to be hired one term, then not hired the next term. So these faculty may not be reported as “layoffs.”

The colleges also have financial reasons for not calling the termination of adjuncts “layoffs.” If they are layoffs, then the adjuncts will claim they do not have “reasonable assurance” of returning to work in the same capacity following their absence; they will be more likely to collect unemployment that the colleges will have to pay. But if they are not layoffs, then the college can claim that these adjuncts do have “reasonable assurance” and cannot collect unemployment compensation. See my ” Why Adjuncts Deserve Unemployment Compensation and How They Can Get It.”

In “Faculty Cuts Begin, With Warnings of More to Come,” Chronicle reporter Emma Pettit describes administrators talking points of letting faculty go: “‘Never slip and call this a layoff,’ reads a Monday talking-points memo from the provost’s office, obtained by The Chronicle. Similarly, ‘do not speak of this notice as a kind of ‘pink slip.’”

Who should know how many contingents have lost their jobs or had their workloads reduced? Obviously, the three faculty unions: The American Federation of Teachers (AFT), the National Education Association (NEA), and the American Association of University Professors (AAUP). These unions represent hundreds of thousands of contingent workers, who outnumber the full-time tenure-track faculty by two to one. But there is no evidence they are keeping track; at least there are no national statistics they have made public.

John Curtis, former Research Director for the AAUP, compiled the best statistics we have on the breakdown of faculty by category: ” Trends in Instructional Staff Employment Status, 1975-2011.” These federal stats are now ten years old, and surely the number of tenure-track faculty has decreased while the number of contingent faculty has increased.

In his Chronicle article, ” A Brutal Tally,” Bauman estimated that one in eight, or 12.5% of academics lost their jobs. (Since contingents were harder hit than others, even this percentage may be too low.) With 1.5 million (or 75%) faculty teaching off the tenure track, it seems likely that 187,500 contingent professors have lost their jobs, with half of these being part-timers. Perhaps another 12.5% (187,500) have seen their workloads reduced, either because of declining enrollments or because full-timers have taken more overload classes to replace lost income in their families.

In “Losing a Generation,” National Public Radio reported last December that “According to new data from the National Student Clearinghouse,  undergraduate enrollment this fall declined by 3.6% from the fall of 2019. That’s more than 560,000 students and twice the rate of enrollment decline seen last year. Most of that decline occurred at community colleges, where enrollment fell by more than 10% or more than 544,000 students.”

As Bauman wrote in The Chronicle, “At no point since the Labor Department began keeping industry tallies, in the late 1950s, have colleges and universities ever shed so many employees at such an incredible rate.”

Well, the AFT for one, has decided that contingents are bad for higher education and they are working in state legislatures to replace their own part-time professors with full-time professors. In “Some People are Delighted Adjuncts are Losing Their Jobs,” Pat Lesko of AdjunctNation wrote, “Thanks to decades of unequal union representation, adjunct faculty have for too long been in the cross-hairs of both their employers and their own local, state-wide and national union leadership. The higher education unions have funded studies and then pumped out position papers that purport that their own adjunct faculty members undermine higher education and student success. Why? I believe the concerted attacks on adjunct faculty by their own labor unions and local union leaders boil down to money and power.”

It seems clear that contingent faculty of all stripes, whether represented by unions or not, have neither the money nor the power to hold on to their jobs.

Keith Hoeller is the Co-Founder (with Teresa Knudsen) of the Washington Part-Time Faculty Association. He is Editor of Equality for Contingent Faculty: Overcoming the Two-Tier System, as well as more than fifty articles on topics related to adjunct faculty.

2 Replies to “How Many Contingents Have Lost Their Jobs from the Pandemic?” 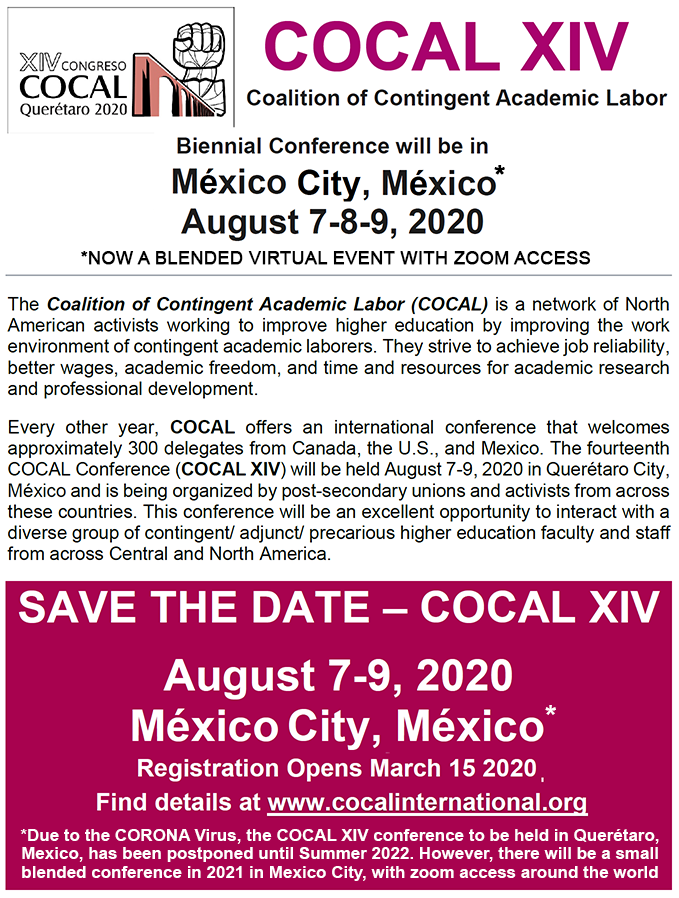