Precariat of the World Unite? 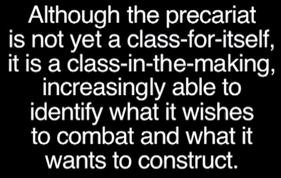 The term “Precariat” has been bandied around for some time now as a convenient catchall for a growing sense of employment insecurity in the U.S. and Europe. It has really gained traction in the wake of British social scientist Guy Standing’s 2011 book The Precariat, provocatively subtitled ‘The New Dangerous Class’. Standing argued that all Western countries were seeing a growing band of workers at the margins of the labor market. The precariat includes the young and old, the unskilled and unqualified who, for whatever reason, are locked out of ‘good jobs’ with higher pay, pensions and other benefits, and prospects of advancement. The book made Standing something of a darling of those fighting for better conditions or questioning some of the worst effects of neoliberalism in economic life. His ideas have been debated and scrutinized on both left and right of the political spectrum.

The success of The Precariat has led Standing to write a sequel, A Precariat Charter: From Denizens to Citizens. If his first book diagnosed the problem, this one offers a prescription for change in twenty-nine articles aimed at reforming work and the conditions that give rise to precarity. The ideas in Standing’s charter range from a complete redefinition of what counts as work to suggestions for reforming education.

Standing’s books have some profound implications for the way we think about the class system in general and the working class in particular. His initial volume’s subtitle ‘The New Dangerous Class’ echoed Marx and Engels’s ideas of the Lumpenproletariat – a dispossessed group at the very bottom of society who at times could be brought into the labor market as part of the reserve army of labor. In Standing’s twenty-first century version, the precariat has the potential to undermine working-class conditions in employment in similar ways and as a group has little or no connection to mainstream society. In his Precariat Charter, Standing attempts to forge new bonds between the precariat and the rest of society.

What I find most interesting about this latest book is what it says about work and what work can, and more importantly, cannot provide. Like a number of social commentators such as the late French social theorist Andre Gorz or British sociologist Zygmunt Bauman, Standing seems resigned to the idea that work has little or no value for most people. Standing criticises politicians and unions for holding on to all work at any cost regardless of whether it is rewarding work or drudge labor, carried out simply for money. This attitude, he argues, compounds the problem of the precariat by creating the conditions where workers are seen as drones and are increasing conceptualised as denizens (people who reside in a place to work with few if any rights) rather than full and active citizens of a state. He calls, instead, for a radical recasting of economic life. Undoubtedly these are powerful ideas, and it’s especially important for someone with Standing’s profile to raise these issues and offer solutions to the problems identified.

However, when we dismiss unattractive drudge work as Standing and others do, we enact a kind of violence on those who are engaged in it, and, in the process, deny agency and voice –a working-class voice. For sure, in a perfect world all work would be incredibly meaningful and fulfilling all the time. But a number of writers take a working-class perspective and find value in basic manual labor. For example, in The Mind at Work, Mike Rose shows the skill and thought that goes into what many consider the most menial of jobs – waitressing. Other great writing on so-called low-end labor, such as Studs Terkel’s Working and the lesser known How to Tell When You’re Tired by U.S. author Reg Theriault, explores the cultures of work that emerge among workers in those jobs. Both of these volumes show workers as fully filled-out people who have ideas, opinions, aspirations, hopes, dreams, and fears. Rose, Terkel, and Theriault write about working-class people with whom you could share a beer. They seem like us, because they are people like us.

In contrast, because they lack voice and agency, the workers in Standing’s two books seem somehow distant. Reading his books, I don’t feel like I have anything in common with the people he describes, however worthy they are of my attention. This may be the product of the book’s big picture ambition, but I find it problematic.

This stance towards the subjects of Standing’s writing extends to the covers of both books. While in A Precariat Charter, the subjects are obviously protesting actively, on both covers the workers’ faces are digitized out, so we literally cannot see them as fully human. And on the cover of the original book we gaze upon three young guys in Hi Viz jackets slumped against a wall eating a fast food meal, images that speak to resignation, passivity, and defeat reinforcing one of the themes of the first book.

I applaud Standing’s commitment and passion in raising the profile of workers at the margin, but it’s important that we don’t just see working-class people as passive victims of neoliberalism. Often it is precisely workers occupying the lowest rungs of the labor market who exercise both voice and agency. After all, the labor movement on both sides of the Atlantic drew its strength in part from precisely the sectors of the economy and the types of workers that Standing defines as the precariat. So I want to propose one more article for Standing’s charter: the recognition of a shared humanity working-class people hold in common.

First published in Working Class Perspectives on 15 Sep 2014, this article appears here via the graciousness of the author, TIm Strangleman.

2 Replies to “Precariat of the World Unite?”